I’m writing this on a rainy Saturday morning, exactly six weeks from the date when Camera-wiki.org took its very first baby steps. The amount that has been accomplished in that brief time truly astonishes me.

Amid a storm of confusion and anger over the fate of Camerapedia, occasional contributor Voxphoto sensed a critical mass of users who were ready to rebel. On 22 January 2011, Vox created a new Flickr group, and sent invitations to join to some of the more vocal participants in the earlier discussions. In the new discussion forum, Steevithak quickly laid out a solid plan of action—and the insurrection was on!

Many of the largest photo contributors immediately joined us—notably, heritagefutures (Dirk HR Spennemann), who singlehandedly added over 6,000 photos to the Camera-wiki.org photo pool.  Starting from zero on 22 January, our photo contributions quickly exploded: I expect to see us cross the 20,000 mark within the next week. (If you’re curious, we’ve already passed 60% of the size of the Camerapedia photo pool, despite that group being 5 years old.)

We’ve also had fourteen nice contributions to our donations kitty, which provided the funds to pay for our web hosting. We still don’t know how those bills will increase as our traffic grows; but we’re in good shape now for the next couple of months.

Because the text of the old Camerapedia was covered under “copyleft” (GFDL 1.2), it was possible to clone the old site intact, and set up a new MediaWiki installation to host it. (This involved some technical complications and a bit of high drama, which Steve wrote an excellent blog post about.)

Some have raised the worry that “forking” the old Camerapedia into two factions would dilute the community’s effort. I’m delighted to say that this is not how things have worked out. Since our wiki reopened for editing on 27 January, I estimate that we’ve added about 250 new article pages, and contributors have made thousands of individual edits. 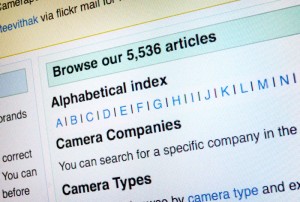 You don’t need to take my (possibly biased) word for this: Our list of recent changes can be viewed by anyone.

It’s illuminating to compare this to the relative dribble of activity over at Wikia’s redirect of Camerapedia. (In truth, there is really only one user who is making substantive additions there—and if anyone happens to know him, please invite him to join Camera-wiki too!)

Another concern was that our search rankings might be overshadowed by all the stale links on the web pointing to Camerapedia.org—and now being redirected to Wikia. But our fresh activity has helped put Camera-wiki.org links onto the first page for many Google camera searches.

Camera-wiki.org is now posting occasional tweets with our site status—as well as highlighting some of the quirkier cameras which turn up in the wiki. We are currently setting up our own Flickr account (not quite ready for use yet) where we can host donated images, and works in the public domain such as scans of vintage advertising.

All this has happened with our efforts staying largely “under the radar.” We originally reached out to a handful of camera-lovers on Flickr, and via a few private messages elsewhere. As we publicize the site even more widely, it will be exciting to see what happens next.

As always, we’re happy to get new writers, new photos, and new supporters. So please check us out and consider how you might like to contribute.

3 Responses to A Six-Week Progress Report